The History Of Halloween

Last night was Halloween. We celebrate it by dressing up, getting free candy and hanging out with friends.

This tradition took many years to become what it is now. Check out the video below to see how Halloween and Trick or Treating began. Or, if you just want some cool facts, you can look under the video.

The History of Halloween

What did you think of the video?

– It began 2000 years ago, in a festival called Samhain, (sow-en), celebrated on November 1st.

– In Medieval England there were two traditions, called souling and guising. Souling was when the poor begged for “soul bread,” in exchange for praying for people’s dead relatives. Guising is when children would dress up and go to peoples houses for wine, fruit and money, in exchange for singing, dancing, reciting poetry, and telling jokes.

– In 19th century America, Scottish immigrants turned these traditions into trick or treating. In the beginning, there were much more tricks than treats.

– In the 1950’s Halloween became what it is now, the family-friendly activity that we all love.

– People spend about 2.5 billion on costumes, and 6 billion overall, including candy.

– I hope you had a great Halloween, and I hope you enjoyed the video and the fun facts!

Have you ever watched the TV show American Idol? At my school, we do something similar, called Athey Idol. It is a chance for students at our school to sing in front of parents, teachers and fellow classmates. There were 31 acts, and a couple of the songs included, “Photograph”, “Keep Your Head Up”, “Say, Say, Say”, and “Still Haven’t Found what I’m Looking For.” There were about 300 people in attendance. I sat with a few of my friends. My good friend Caden performed “Say, Say, Say” with his brother. They did a great job! A couple of my other friends also performed and they were really good singers. The audience voted for their favorite act. Even though there was only one winner, all of them deserved to win. If you ever have the chance to go, I would suggest attending, because you will have a great time! (If you’re wondering, Caden is the one with the hat in the picture below.) 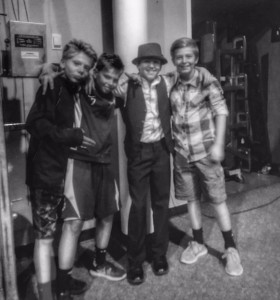 This last weekend my dad and I went to Seattle for a soccer tournament. I was going to play two games, against Washington Premier and Issaquah Gunners. We drove up there on Friday, with my friend Hansi, who is on my team. When we got up there, we checked in to our room. Then we went to the shuffleboard court across the street. We played for about an hour with my friend Kyle, who also got up there early. Then, we had dinner at a Thai restaurant. It was delicious! The next morning I saw the rest of my teammates and we got prepared for our first game against Washington Premier. Our team played hard but unfortunately they won 1-0. After the game we went back and watched some soccer and chilled out in our rooms. Later, we had dinner the hotel and watched the USA-Mexico game. Mexico won 3-2 in overtime. After  the game we went up to our rooms and went to bed. The next morning we had breakfast at the hotel buffet. Then we got ready for our second game. The field was very muddy, since it had rained hard last night. Unfortunately, they won 1-0. After the game, me and my friend Kyle had lunch at the Tipsy Cow Burger Barn. The milkshakes and burgers there were awesome. Then my dad and I drove back to Portland to attend another soccer practice, this time for RTC. After the practice I was very tired after a long weekend of soccer. 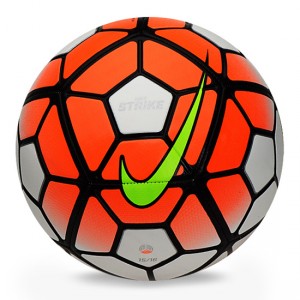 Next on our Road Trip we visited Yellowstone National Park. Yellowstone was the first national park in the country, established in 1872. Now, as you probably know it is in the state of Wyoming, but when it was established, Wyoming wasn’t even a state! Theodore Roosevelt was president the time when Yellowstone was named the first national park. At the North Entrance, near Gardener, where we stayed the night, there is an archway called the Roosevelt Arch, that honors Theodore Roosevelt and his accomplishments. Back to Yellowstone, in Lamar Valley, near Gardener, we saw lots of herds of bison, also called buffalo, grazing and roaming freely. We also saw pronghorn, a type of antelope. Did you know that pronghorn are the fastest animal in North America? Yellowstone is one of the coolest places on Earth. 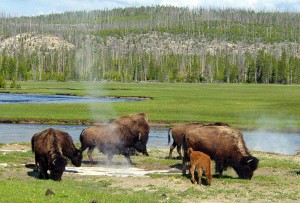 The next stop on our Road Trip was Jackson Hole. Jackson Hole is located in Wyoming, which was another new state for me. Wyoming is the least populated state in the U.S. Back to Jackson Hole, we stayed at the awesomest hotel ever, The Hotel Jackson! The first night in Jackson, we had dinner at Merry Piglets. I had some tasty tacos. Also that night, we visited Ripleys Believe It Or Not. If you didn’t already know, Ripleys is a place with weird, cool and disgusting stories and artifacts. For example Ethan and I stood next to a sculpture of the tallest man ever, we saw shrunken heads, (nasty) and ever the largest ball of wire in the world, along with lots of other things. The next day we had breakfast and went to just outside of Jackson to a place with tram rides and lots of other stuff. We went on the tram ride up to Rendezvous Peak at 10,410 feet of elevation. It was awesome in Jackson Hole!

After Boise, we drove to Ketchum, a resort city near Sun Valley. We stayed the night at the Tamarack Lodge which was a cool hotel in the middle of town. In Ketchum, we got to go swimming at the hotel. We walked around downtown and found a nice little breakfast place called Java Cafe. It was delicious! Then after breakfast we drove to Sun Valley, which is pretty much 2 hotels, some shops and an opera house. We walked around in Sun Valley for a while and then we decided to go biking. We biked for about 6 miles on bike trails. After we were done we had ice cream. I can’t wait to come back to Sun Valley and Ketchum!

I have made it to Idaho! I have never been here before. Idaho is the state between Eastern Oregon and Wyoming. Idaho has a population of  1,634,000. Idaho has lots of tourist attractions such as the Sawtooth Mountains and the Craters of the Moon. Idaho is known for its potatoes. Idaho’s capital city is Boise. Boise is the biggest city in Idaho. Boise’s population is 214, 237. The Boise state Broncos play here. The Boise River is a big place for boating and fishing. It was super exciting to get to Idaho and then to Boise. 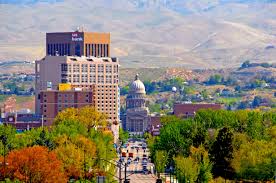 Hamley’s is an old cowboy shops that makes custom saddles and cowboys hats. They have all types of saddles for all types of horses. I also saw a man making a cowboy hat with a tool called a steamer. Hamley’s is also famous for its cafe which is where my family and I ate breakfast. The hats are “The best in the West”. Ethan and I tried on hats there. My grandparents like going there. It was fun visiting and actual cowboy shop. 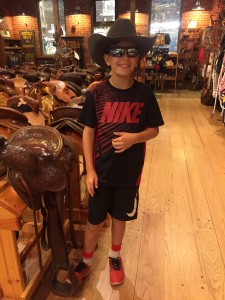 Pendleton Woolen Mills makes blankets, towels, clothes and anything else made of wool. They make the best wool products in the Northwest. They are handmade and they are very soft. It was established in 1909 and has been making quality products ever since. One cool fact is that they use Native American designs on their blankets to remind us of our heritage. They are only made Pendleton and they are sold around the globe. If you are going to buy a new blanket, I suggest going to the Pendleton Woolen Mills!

Pendleton was our next stop after Hood River. We stayed the night here, at the Red Lion Hotel. Pendleton is an old cowboy town in Eastern Oregon. The Pendleton Roundup is one of the most famous rodeos in the World. It is the 3rd biggest in the country. It is held every year in Pendleton. My grandparents are yearly visitors at the Roundup and it is the weekend of my birthday. The city of Pendleton began in 1860 when a farmer bought a huge piece of land then sold bit by bit of it to developers. Now, it is a historic city with lots to do.


adopt your own virtual pet!